The End of This Blog

What I saw: another tick stuck in my leg.

What I did beforehand: I had a memorable mother’s day, with some of my kids around and a lot of time in the yard. The next morning I found the tick.

What I did:  about ten days later I woke up with a high fever, with intense body aches. I went to the doctor and she ordered a lot of blood tests, which were negative. She concluded I had the flu.

I felt better after about 4 days and resumed my life.

Things that were sad: I was sick again with fevers and body aches a week after that.

I went back to the doctor, who re-ran some bloodwork, which was still negative, but somehow in my bleary-eyed limpness we managed to agree that we should treat it like it was Lyme,  and I started a course of doxycycline.

By the time the June horse show rolled around I was still light sensitive and feeling sort of ok but not 100%.

How I napped: there had been a good chance I wasn’t going to make it to the show at all and so when I did make it there I took each day as carefully as I could. Saturday I had two classes, one in the morning and one in the afternoon, and in between I had horse-show breakfast and stopped in my car to put something back and it was breezy and delicious there so I opened all the car windows and took a nap in my car. As I dozed I listened to the sound of horses walking on pavement. Sunday my schedule was the same, with a class first thing and then another six hours later. I was, in fact, going to be the last to go from our barn, so I knew everyone was waiting for me. 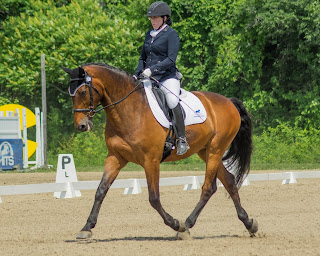 Where I sat: my last test was Level 1, Test 1, which I've only done a few times. We started out fine, but when I asked Hado to lengthen his canter he kind of blew me off, so I had to get after him. The second canter lengthen was much more like what I’d asked for. And, in between the canters I started to feel we were riding the test, not just trotting at X and cantering again at C, but connecting the pieces. And doing it together, not me sitting on and steering a bicycle/horse but both of us as a unit.

Why I cried: when I halted and thanked the judge, I felt a wave of relief and gratitude.  A week before it didn't seem like I'd be able to show. A year before we weren't doing this level.

A couple of years ago, Hado was kicked in the knee by another horse and had to spend several months doing nothing but stand in his stall. We didn't know if he'd heal from that. When he was cleared to start walking around he had lost so much muscle in his top-line I compared him to a sweater that hung too long on a hanger. It took two years to get him completely back in shape.

And a few years before that I had taken on the challenge of learning to ride him believing he was too much horse for me, and worried that it might not work out.

So after I turned and headed out of the ring, I thought about how great it is to have a horse to learn on, what a privilege to have the time and money to go to shows, what a joy it is to have a partner like Hado, and how a lot of things conspired to stop us but we kept going. I started to cry.

Who was waiting for me: P., one of the grooms at the barn, came along as an extra pair of hands at the show. She had water, and she listened with understanding when I had something to tell her.

What it is: this is the last post of this blog. All of these posts (except this one) and all future posts can be found at another site.

Why this blog is ending: the new site is on Wordpress, so I will be able to add features.

Things that are (a little) funny: when I interrupted my regular writing to take a class, people noticed, and asked. When the class ended, I was out of the habit of writing and posting and had trouble re-starting.

Things that are not funny: I promise to try to keep blogging. Please come with me.

Who should see it: you. Thank you for reading this blog. In the beginning, you went to Italy with me. You came with me to find treasures in my basement. You ragecooked with me. You read about my pets, my  headaches, my neighbors, and my childhood. You read about the Bacon Provider and my kids. You read about the plays I saw. You got a fuck-ton of my opinions. Some of you found typos. Some offered words of encouragement. Some of you make me think that someday I really will get around to writing a book (or three).

What I saw a few days after I got home: a photographer (and friend) caught me as I finished at the show. When she posted this photo on her Facebook, I didn't immediately recognize myself. I didn't even recognize my horse. What I did see was the story, captured in a moment. And I just happened to know the story. 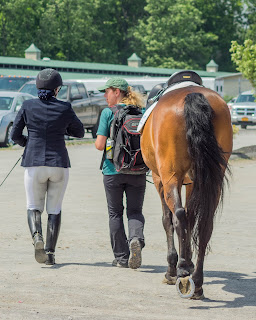 Posted by Hamster Relish at 3:36 PM No comments: