What we have eaten in Italy 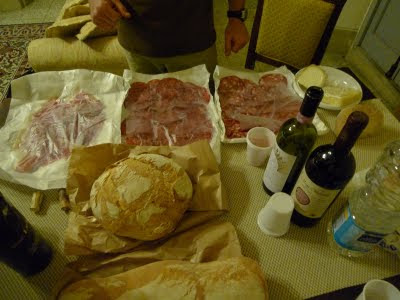 Of course I have had a lot of pizza in Italy, and pasta as well. Two nights ago, I enjoyed a mushroom risotto dish that was certainly the best risotto I have ever had. Last night, we had a picnic of bread, salami and cheese with some truly good wine, and because it was a group of us who had built the bonds of friendship both over some miles of mountain trails and in the context of a leadership class we did together, it will be a meal I think of for a lot of time to come.
Some complain that in the past gelato was a seasonal treat in Italy, but now it is ubiquitous. In areas of towns with regular tides of tourists, a gelateria can be found on nearly every block. Gelato is something one can enjoy while walking and talking, two things both Italians and tourists do a lot. So far, I have tried zabaione (which was made with the local dessert wine Vin Santo and easily the best gelato imaginable), stunningly white cocco (coconut), nocciola (hazelnut), pesca (peach), stracciatella (chocolate chip), pistacchio, and a surpringly tasty and fresh pineapple. If it sounds like I have eaten a lot of gelato, I have.
Posted by Hamster Relish at 5:22 AM