I thought I was done telling stories about the Landlords, but I ran into Her on the driveway this weekend and Her look of amazement made me realize I wasn’t done telling stories about them.  We have lived in the house 256 days as of this past weekend, but we persist in feeling we keep surprising them by being here.  Because of more tree planting (yes), His car was parked halfway up the driveway, with about 6 feet of room to get by.  One of their cats was in the driver’s side window, and at first I mistook it for Him. I crept slowly down the drive, trying to understand what I was looking at, and She asked if I could get by in my car (which I couldn’t).  I mistook her question for a joke since it was obvious that I couldn’t.
There is a large mature flowering dogwood tree between the Big Red Barn where we live and the garage where the Landlords live. It is no more than thirty or so feet tall, but broad and substantial. It was damaged pretty heavily by the snowfall in late October, and now shows that removing the broken limbs late last fall was not enough. A ladder was propped in the tree a number of weeks ago now, and it has not moved as He tries to correct with pruning a process which looks to me like an ordinary old tree death. Throughout the weekend I heard sneezing coming from the tree, either because He has allergies or because he has a cold. 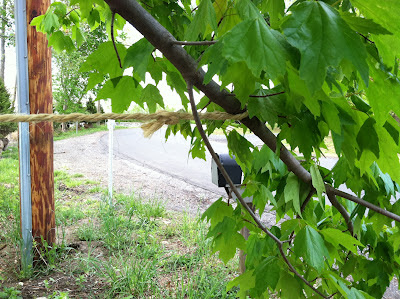 Pruning is a year-round hobby for the Landlords, along with splitting and stacking firewood by hand.  There is a large maple at the top of the driveway growing out from a crotch made by an old dead stump and the piled-rock wall. It is the sort of volunteer tree that grows in an over-looked spot until one day it drops a huge limb and traps your cars on the other side.  It has a lop-sided growing habit, extremely vertical branches, and a rotten-looking core. If it were a tree on my property I would have it removed.  One weekend, the Landlord took it upon Himself to prune it, highlighting its inherent unattractiveness. He then used twine to tie several of the lower, live branches so that they make a better angle with the tree. The result was extremely startling for me, since it suddenly became impossible to see to the left from my car as I emerged from the driveway. Before I had a chance to say anything, though, the deer came along and ate every single green leaf on that branch, so it is now easy to see through.
In between pruning and planting sessions this weekend, a repair was made to the garbage hutch, which is at the top of the driveway, across from the sad ugly volunteer maple, facing the road, for the second time. Within only a few days, the first repair had become a dangerous piece of trim with sharp protruding screws every ten inches along its length. Seeing no new support for the lid, I have reason to believe this repair may remain solid until mid-June. 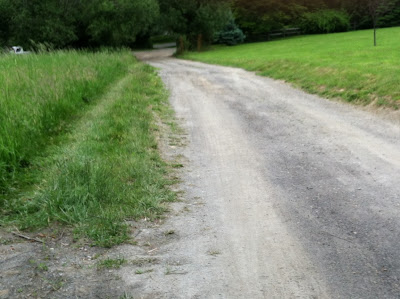 The garbage hutch stands in front of a large stand of mature bamboo.  This bamboo collapsed under the weight of the wet snow in October, and lay across the driveway like a fully-loaded snow-flinging trebuchet, but stood up again when a willing nitwit (me) shook off the snow. (“Shook off the snow,” dear reader, is a euphemism; it really means, “got a lot of snow down her sleeves and coat.”)  Now, because of the massive root structure established under the bamboo, numerous spring shoots have emerged.  Young bamboo is pointed, and can pass through many layers of leaf litter or simple impale it and carry it up with itself like a hat on its head.  Because the bamboo is at the property line, I am not sure if its presence is the Landlords’ doing, and I doubt it.
I followed Him out this morning, as he sped up the driveway, demonstrating the revision He is making to the shape of the driveway, and I now understand the new path in the grass. He also veered off the driveway at the top, plowing through all the young bamboo sprouts with his car. From behind it looked like He was careening out of control, but in reality, he was doing some more pruning.

Posted by Hamster Relish at 8:02 PM