I saw something in the woods

What I saw: the corner of a large, gray mattress, of custom dimensions similar to a full, with faint stains and white piping. Someone had driven a truck or van up our road, past the sign that says “NO LITTERING,” stopped, and thrown the mattress down an embankment into our woods.

Who went with me: the Bacon Provider was walking the dogs with me, his last day at home before heading out early for the first of twelve trips on his schedule between now and mid-December. I wished I found it alone, because he’s got enough to worry about. 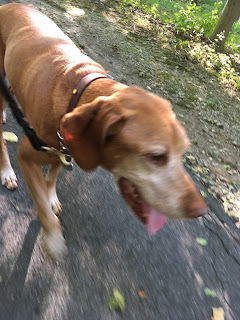 What I did: when we got back, I called the local Bedhead Hills police non-emergency number. I spoke to a phone-answering marmalade cat, roused with a start from her early mid-afternoon nap, taking seriously her responsibility as the one who makes sure that real emergency calls go to 911. "I don't know if you're who I'm supposed to call," I said. Then I explained what I found.
"Hold on a moment," meowed the ginger cat.
It was more than a moment.
When she came back to the phone, she said, "You should call the Office of Gravel and Thoroughfares. When they open on Monday."
I asked for their number.

Things that were funny: on Monday, I had to wait until after Pilates to call. Then, I had to re-boot my phone because where we live in Bedhead Hills, we have little coverage mobile-phone-wise, so we use the wi-fi calling, and my mobile-phone company, being one of the last to add the feature of wi-fi, offers the most unreliable version of it. So then I called the Bedhead Hills Office of Gravel and Thoroughfares.
The phone was answered by a chipmunk.
"Bedhead Hills Office of Gravel and Thoroughfares, chipmunk speaking," she said, very high and very fast.
"Oh, hello," I said, stifling a yawn because Pilates is exhausting and I was not quite ready to talk on the sometimes-not-working phone to a chipmunk. "Hi, yes, ok, we found a mattress on our property yesterday. It wasn't there on Saturday, but then like I dunno someone must have thrown it out of their car and now it's there. I called the police and they said to call you?" I said it like that, asking, but not asking.
"Oh my gawd!" the chipmunk yelled before I finished talking, very loud and with great feeling. "What is it with people and the dumping!?"

I said something to the effect that I don't know.
" Is it on the road?" asked the chipmunk.
"No, it's down the embankment, in our woods."
"Oh," said the chipmunk, "So here's the thing. If it's in the woods, I can't help you. But if it's on the road, I can send someone out today to get it. But I didn't tell you that. You never talked to me."
I forgot her name, thanked her, hung up, and changed my clothes.

What I wore: Asolo hiking boots that I bought to go to Italy in 2009 and had re-soled this past winter so they are both like-new and broken-in, heavy socks because my feet are long-suffering and weary, blue Ben Davis Union-made overalls that were a gift from my sister-in-law many years ago when we owned a farm in the San Juan Islands, an old and threadbare medium blue shirt from Barney's that was once the Bacon Provider's, work gloves. 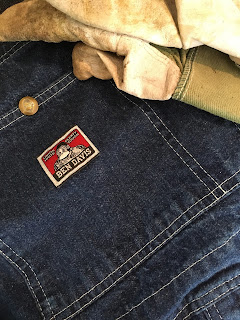 Why I saw this show: I pick up trash that people throw out the their cars onto my property as soon as I see it.

How I got scratched: choosing between walking along the road and clambering down the embankment or bushwhacking through the dense, late-summer forest, I opted for the latter. It was harder to find than I thought it would be. The mattress was resting along the slope of the embankment. I tried to push it; an upholstered foam slab, it just sort of crumpled. I pinched the dingy white piping through my gloves and dragged it up behind me. It didn't smell as bad as I feared it would.

Things that were not funny: had the litterbug left it on the shoulder of the road, they could have saved me the trouble.

Things that were sad: having dragged it out of the woods, I saw that it left a wide area of crushed weeds. I did feel some of that satisfaction of doing something hard. Only later did I find the scratches on my arms. 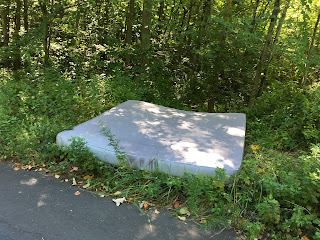 Another thing that was funny: I tried to call the chipmunk at the Bedhead Hills Office of Gravel and Thoroughfares right away, but I had neither enough cell-phone bars from the sky-gods nor enough wi-fi signal from the house. So I walked back. Once at home I had to re-boot my phone again in order to make the call. My first attempt went to voice-mail. I was not leaving a message.
I called again after changing out of the work clothes.
The phone was answered by the chipmunk.

"Bedhead Hills Office of Gravel and Thoroughfares, Chipmunk speaking," she said, very high and very fast.
"Oh, hello," I said, with excitement. "Hi, yes, ok, I live in Bedhead Hills, and someone dumped like a mattress on our road.
"Oh, I see," the chipmunk said, serious but with real feeling. "Where is it?"
I described its location.

The chipmunk asked how big it was.
I said it was similar to a full-sized mattress, adding, "It's not so heavy a 5'5" woman who's 53, but pretty strong because she does Pilates could lift it."
The chipmunk thought this was hilarious.

What I didn't see: I went up to my sewing room, where I am working on a new quilt. I am listening to an audiobook, "The Feminine Mystique," by Betty Friedan, so I didn't hear when the truck came to take the mattress away.
Posted by Hamster Relish at 12:16 PM