We had a spring snowfall in New York last night, although today it is raining and the snow has already been washed away.  Snow in April feels a bit like a joke, which reminds me that today is April Fool’s Day, my father’s favorite holiday.


My dad loved nothing better than an April Fool’s Day joke. One year, one of the boys my dad coached in hockey called him up and had him convinced our 1972 royal blue Chevy van had won Car & Driver’s Car of the Year. In a put-on English accent, the boy instructed my dad to have his car “cleaned and disassembled” for an upcoming photo session.


Dad’s favorite trick would be to call up one of his children and leave a voicemail sharing a bunch of news. It would be up to us to figure out what was true and what was a joke. Once, all of it was true, which was the most confusing thing of all. This is how we found out his second wife was pregnant. I am not kidding about this. 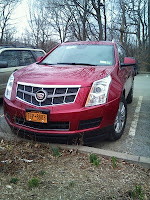 Other than the story of our motel, which I will save for another day, one of the big jokes of our trip has been our rental car. We have rented a 2010 Cadillac SRX 4, a “luxury crossover vehicle.” This chrome-embellished mini-behemoth is packed with innovative features, including a round LCD in the center of the dash which can display all sorts of info, from speed and miles travelled, to the air pressure of each individual tire, oil life and battery charge. It has a baffling parking brake button instead of an ordinary hand-brake stick or floor pedal.   The enormous maw of a hatchback is operated with the push of a button as well.  Due to huge rear pillars, the back windshield is but a porthole, but a back-up camera provides a view, however disconnected to the colors of reality. When the car is in reverse, it emits two different audible alarms when the undercarriage of the car is within three feet of anything.  With all the beeping, parking feels like committing several violations at once, and yet the system will not warn you if you are about to swipe the windows with the limbs  of shrubbery. 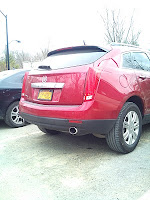 The SRX has a keyless key fob that you use to unlock the car, and then you drop it and lose it in the interior of the car since it is started not with the key (there is no key), but with the push of a button.  When you leave the lost keyless key fob in the car and try to get out, it will honk at you, adding to your embarrassment. Why would you be embarrassed by this car? Because it is one of the ugliest cars I have ever seen. For body styling, it seems to have taken its design cues from the Pontiac Aztek, which is certainly one of the ugliest cars ever made.
Posted by Hamster Relish at 4:05 PM