I saw “The Purple Lights of Joppa Illinois”

What I saw: “The Purple Lights of Joppa, Illinois” at the Atlantic Theater , at 330 W 16th St. in, like, what fucking neighborhood is that even? Chelsea?

What I wore: mascara, gray Pumas, tan short jeans from Lands End that I bought when I read that they have a new CEO who is trying to make better, hipper clothes, Lilith striped tank top, Steven Alan plaid shirt, cardigan from the Faroe islands, sunglasses because I left my regular glasses back at the house in the suburbs  overlooked my glasses sitting in the center console of my car.

What I did beforehand: had a hotdog with a Bell's Oberon wheat ale and then coffee with my friend B, who used to be an "internet friend" (a.k.a., stranger), but is now an IRL friend who needs an apartment hella bad, and after that I bought a sympathy card for my mother-in-law because she had to put her dog to sleep, and I had a conversation with the guy in the card shop and he said they sell out of pet-death-sympathy cards all the time, so I'm thinking someone excellent should do a whole line of greeting cards for pet owners and I have a whole bunch of ideas around this so get in touch if you're gonna do it, and then I went back to the apartment to pee, and then got on the E train to the theater, and it was crowded.

Who went with me: several groups of older women, an older woman rocking sequined sneakers, two pairs of youngish guys, two pairs of well-groomed older guys, two guys with canes, two guys wearing suspenders, one guy with his Mets hat on backwards (he took it off), one guy in a straw fedora, and at least one grouchy old lady. None of the women wore hats.

Walks faster than me,
And far better dressed than me:
Handsomer than me. #haiku #nyc pic.twitter.com/cq92M4ihDm
— Hamsteria d'Relish (@hamsterRelish) June 9, 2016

How I got tickets: online, from a chart where I clearly thought I was choosing a front-row seat (but wasn't, see "Where I sat").

Why I saw this show: relentless marketing

Where I sat: G101, in the back row, on the end, like I'm a trouble-making teen who expects to throw spit-balls and chew gum and bolt as early as possible. 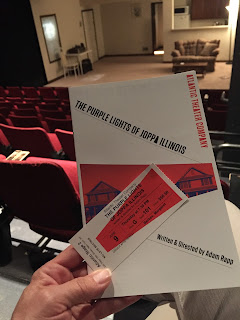 Things that were sad: today I'm feeling like I've lived in New York long enough to know someone, anyone who would come with me to see more-obscure, off-Broadway shows on a Thursday.

Things that were funny: when there were only eight people seated, a white-haired woman in the second row loudly complained, "It's freezing in here." When no one replied, she added, "I told them, and they told me it'll warm up when there are people in here. What good is that?" New Yorkers like to complain out loud to no one in particular. Or, maybe, to everyone in particular. But actually, I noticed at 7:34 when the theater was almost full it was still cold.
Three minutes later, there was a lull in the audience chatter as everyone collectively wondered when they'd begin.
The play was serious, and had funny things in it, especially related to the younger characters, and a couple of Facebook jokes almost landed. Almost.

Things that were not funny:  I can now tell the different between the dry cough of allergies and other kinds of coughs.

What it is: a ninety minute play, performed without intermission. It's about family dysfunction, and mental illness, and it isn't as much of a downer as that sounds.

Who should see it: people who enjoy extremely awkward silences, folks with compassion for the mentally ill, and anyone who believes in redemption.

What I saw on the way home: two rats hard-core chasing each other around the local tracks of the E train.
Posted by Hamster Relish at 9:00 AM