I counted the bottles

What I saw: the Bacon Provider bottling a batch of home-brewed beer

What I did beforehand: cleaned the dining room in anticipation of next week’s Act I of the Annual #Ragecook Festival:, known to most American people as “Thanksgiving”

What I wore: really dirty jeans, t-shirt with sad slogan about giving up, RBF

Who went with me: the dogs napped the whole darned day. At one point I took a bucket outside to rinse it with a hose and I let Captain follow me out and he took off running like an asshat. 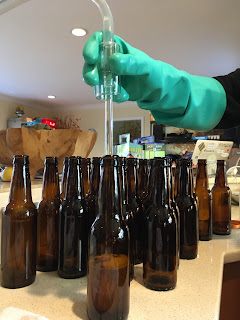 Why I saw this show: actually, I was finishing another batch of bread and had very little choice in sharing the kitchen

Where I sat: at the stupid counter in the kitchen, which must have been an innovative design feature in the 80s, jutting into the kitchen like a giant, inopportune letter “J,” but really it creates a bottleneck for the people trying to use the kitchen for actual cooking.

Things that were funny: when The Graduate finished college, he wandered around the way new graduates do, arriving after a few months at the sensible idea that he should live in Brooklyn where his friends are. Simultaneous with his installation in an as-yet unfashionable and therefore still almost-affordable neighborhood, he and his roommate started making their own beer. I have other adult beer-making friends (because I know high school biology teachers), and I have sampled their best offerings politely, wondering privately at how anything so easily obtained at a store and so complicated and time-consuming to make at home would be something one would want to make at home. But then, over time, I was called upon to sample the home brewing efforts of the Graduate, each with the gruesome and hilarious names that seem essential to home brewing culture. And I found to my surprise that his beer was good.

By the time we installed ourselves permanently here in Bedhead Hills, the Graduate had turned his home brewing hobby into a regular event, and was developing the ability to improve on things and even replicate prior successful efforts. And by the time we were celebrating the Bacon Provider’s first birthday here in Mrs. Gardenwinkle’s 80s Museum, the Graduate had convinced me that we should give the Bacon Provider his own beer-making equipment. Mostly, I went along with it because it meant the Graduate would have a reason to visit.

Our first beer-making efforts involved us to the extent that we got to stir or add hops; mostly we stood around watching. Our first beer was shockingly drinkable, and I thought it was always going to be like that. But we learned fast. Our second smells so chemically incorrect we have not bottled it. In fact, we can’t deal with it, and it sits in its five gallon glass carboy, glowering at us, neglected in the basement. Our third batch (a traditional British IPA we named Brexit) is good but flat, probably owing to a measuring error because we had to bottle it ourselves.

This batch, I guess it’s our fourth. It’s sour, because I like sour beer. I named it for the smiling emoji with the closed eyes and tongue sticking out.

Things that were not funny: something leaked under the sink. The Bacon Provider had to take everything out and play plumber again. 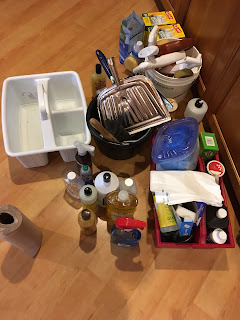 Something I ate: toast and soft-boiled eggs

What it is: home brewing is a time-consuming hobby requiring a lot of equipment that I can’t remember the names of, expensive ingredients, and specialized knowledge of water, yeast, grain, hops, and a bunch of science. Mostly, you have to clean up a lot. 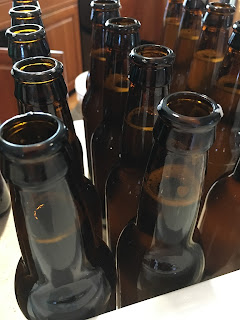 Who should see it: members of the Church of Beer

What I saw in the other room: good sunbeams 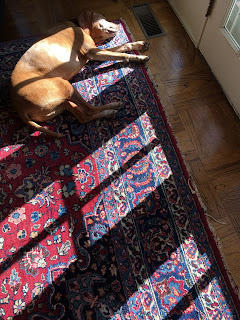 Posted by Hamster Relish at 1:28 PM