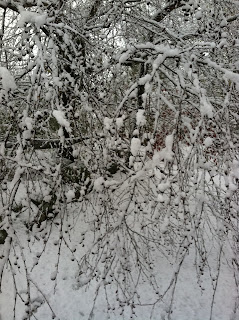 The snow was exciting and our house was warm once we made it in. Not long after, the power went out and we were plunged into darkness.  Snow makes things very quiet, and all we could hear was the sound of trees collapsing under the weight of wet,heavy snow.  It sounded like distant gun-fire.
My husband, a computer scientist and electrical engineer by training, is a relentless trouble-shooter, and able to build fires in  less than optimal situations. It was necessary to liberate many armloads of firewood from our landlord's supply, next door, but it was an emergency and only October after all.  Who is ready for winter weather in October?  We were short on batteries, candles, and drinking water, too. But the relentless trouble-shooter kept the fires stoked, and went out for candles and drinking water, and we had a day and a half of comfortable in-house camping.
Monday was when there was no longer enough water in the toilets to flush them, and the relentless trouble-shooter took the train in to the city for work.  School was cancelled for lack of power. Our schedule was full of appointments in the city on Tuesday and Thursday, and NYSE&G was showing on its web site that our power would be restored Friday.  At this point, we decided that a hotel in the city with flushing toilets, hot showers, central heat, and room service was better than a cold house.  The dogs were dropped at the doggy-day-care center where they spent regular times during the summer, and they trotted in as if they’d been there just last week.  The cat, I am sad to admit, was left with three heaping bowls of food, four bowls of water, and our best wishes.  We drove to the city and handed off the car to valet parking.
Our first order of business was getting a haircut for the son of the relentless trouble-shooter, and mid-town has a barber on almost every block. A decent haircut was obtained, along with several whispered compliments on the handsomeness of the son of the relentless trouble-shooter.  This was embarrassing. Worse, there were people in costumes on the sidewalks of Manhattan, because, of course, it was actually Halloween.
By Wednesday, NYSE&G had restored power to half of the town, including the school, and students were expected back. I stopped by the house to check on the cat, and while he was a little chilly, he was in good spirits and did not seem distressed. Outdoors, I could hear the drone of the neighbors’ generators.  Our power returned Thursday, although our internet service was not restored until late Friday.
I have spoken to the landlord about stealing their firewood, and placed an order for our own supply.
Posted by Hamster Relish at 6:00 AM