Origin of the Tiny Ninja 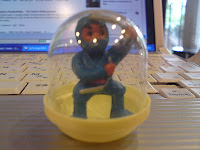 Once, I had a long sit in the waiting room at the pediatric dentist, where there was a woman trying to deal with her two children, a boy and a girl. The mother had a piercing voice, and her young kids were equally loud.  In stead of going to the play area to unload the buckets of blocks and animal figurines, the children spent a lot of time standing near their mother pushing each other and exchanging strange requests for hugs or space. It went like this: Boy: "I want a hug." Girl: "No." Boy hugged girl, pinning her arms down. Girl struggled free and pushed him over. Girl: "Sorry." Boy: "Meanie." Girl: "Ok, I'll hug you." Boy: "No. I don't wanna." Girl chased boy around mother's chair until he fell. The mother would tune in and out, looking up from the waiting room copy of Mothering magazine to demand an apology from one or the other.  Mother: "Children, get along. You love each other."
In time, the kids went to their appointments and when finished the trio filed out together. At this dentist, along with the tiny container of floss and a new toothbrush, patients were also given a golden token to use in a special vending machine as they leave.  Somehow the boy had obtained two tokens, perhaps because he had required a bribe for cooperation.  The girl protested that this was unfair, and was ignored by the mother, who was directing the boy in his use of coins in the vending machine.  The girl expressed her objection by laying down on the floor under the machine stand, within view, but went unnoticed. When she had her turn at the machine, she discovered that it delivered her a tiny ninja, just as it had twice done for her brother. She held it in her hand and thrust her fist up as high as she could hold it. Boy: "Lemme see!" Girl: "No." Boy: "Lemme SEE!" Girl: "Nuh-huh!" The girl took off, out the door, down the hall towards the elevators. The boy took off after her, dropping his prizes and his coat in his wake.
The last I heard of them came from the hall. Mother: "Brandon, you are responsible for your own ninjas."
Posted by Hamster Relish at 4:55 PM