What I did: voted in the United States Presidential, Senate, and 18th Congressional district races; also voted for state senate, state assembly, and a bunch of judges. 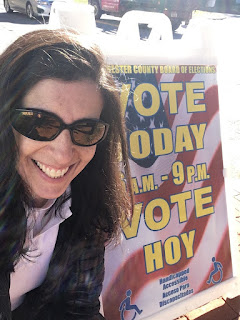 What I did beforehand: got up early to give the Bacon Provider a ride to the train, drank tea and looked at Twitter, riding lesson, came home and got 19.

Who went with me: 19, who tried to register to vote in time for the primaries and had his application denied because his signature did not match his name (yes, really). 19 spent a number of days researching the candidates and grew frustrated that he couldn't figure out what a truly trustworthy source of information would be. Add this to your post-election list of things to do.

How I registered: it took me two tries as well. It doesn't seem to work if you try to change your voter registration when your change your address with the DMV. This is something the New York State Board of Elections should fix.

Why I voted: because when this country was founded, I was not considered a person, and when the 19th Amendment was ratified like 140 years later it was only due to the enormous and continuous efforts of a bunch of women who were willing to go to jail for the cause. And then it was only the white women who got to vote, right?

Where I voted: in the Bedhead Village Presbyterian Church, one of those gorgeous old white 1870s wood churches with all the nifty pointy architectural parts.

Things that were sad: they do not provide "I voted" stickers.

Things that were not funny: because it was 19's first time voting, I asked the woman who gave us our giant ballots in their even more giant privacy sleeves if I could help him if he needed it. The woman unsmilingly responded, "As long as you are not his boss."
I wasn't sure if she was joking or not, but I decided to take her seriously. I told her I am not his boss.

Things that were funny: everyone there, from the workers to the voters, was just as serious and businesslike as 19. He would not pose for a selfie with me.

What it is: yeah, actually we live in a republic, but it's our democratic principles that Americans like to think stand for us.

Who should vote: as of this writing , the countries with mandatory voting are Argentina, Australia, Belgium, Bolivia, Brazil, Democratic Republic of the Congo, Costa Rica, Dominican Republic, Ecuador, Egypt, Greece, Honduras, Lebanon, Luxembourg, Mexico, Nauru, Panama, Paraguay, Peru, Singapore, Thailand, and Uruguay. I've been trying to remember which was the first election I voted in. The first election I would have been eligible to vote in was 1984, and I may have voted for the Mondale/Ferraro ticket, but I don't remember. I was still an undergrad.  In 1988, I was done with grad school and lived in Burlington, Vermont, and while have a vague memory of voting for Dukakis, I can't picture it. I know I voted in Vermont in 1990 because we sent our former mayor Bernie Sanders to the U.S. Congress that year, as an independent. I specifically remember voting for Clinton/Gore in 1992, with the two-year-old The Graduate in tow, and vividly recall standing in line outside the library in the scruffy northern California town where we lived then. I must have voted for president before because it was the first time I actually voted for the winner in the presidential race. 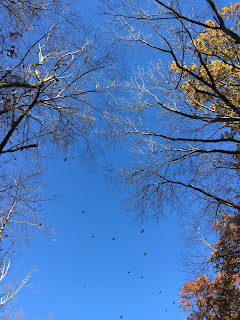 What I saw on the way home: signs and flaggers and traffic cones, warning us of the men working in the trees. It still seemed like everything was going to be ok.
Posted by Hamster Relish at 4:00 AM