I saw "The Band's Visit"

What I saw: The Band’s Visit, a production of the Atlantic Theater Company, at the Linda Gross Theater on W 20th Street between 8th and 9th

What I did beforehand: cleaned the dining room, watched the Bacon Provider bottle a batch of beer. 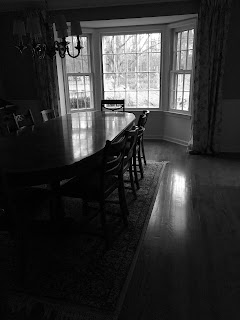 Who went with me: the Bacon Provider, who seemed like he would have rather done nothing

How I got tickets/Why I saw this show: I subscribed to the season, online, but oh wait also okay in December of 2011 I ate lunch at a table next to Tony Shalhoub and was very distracted by his voice behind me, animatedly discussing the details of an exciting new project.

The percussionists had sticks in their bags. And I didn't know about the "h" then. Or also how soul-crushing New York is. 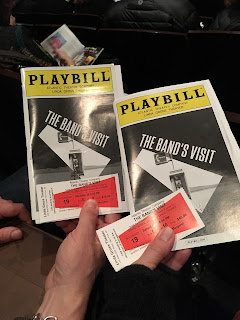 Things that were sad: this is not a tear-jerker, but is rather a sad musical about the desolate lives of lonely people

Riding the train back to the sad lonely suburbs. Too many people on the phone. Most talk about where the train is now.
— Hamsteria d'Relish (@hamsterRelish) March 13, 2012

Things that were funny: police band uniforms, roller disco, first dates. As we left the theater it seemed the rest of the audience filing out around us had lapsed into  speaking Hebrew.

Things that were not funny: the joy of celebrating the glorious diversity of our world’s different cultures now feels like a dangerous and naive indulgence

Something I ate: fried calamari at a decent Italian restaurant about a block away

The super of our old building is so lonely and creepy he will call me back if I call him by accident and leave no message.
— Hamsteria d'Relish (@hamsterRelish) September 15, 2015

What it is: a new musical adaptation of a movie, performed without intermission, and lasting 90 minutes.

What I saw on the way home: a large and healthy-looking rat peeking its head out of the bushes on a traffic island near West 34th, torrential rain that rendered the surface of the normally dark and narrow Saw Mill Parkway a glassy lake, and a mouse that I did not run over about half a mile from home. It was one of the scariest drives home of my life.